Hidden away in ClipArt ETC > American History and Government > 1861-1865 Civil War is the complete set of over 700 Frank Leslie illustrations of the American Civil War along with hundreds of related images from similar sources. Frank Leslie’s Illustrated Newspaper was one of three national illustrated newspapers founded in the 1850s. With the beginning of the Civil War in 1861, the publication took off as tens of thousands of readers anticipated the weekly illustrated update of the War’s progress. What makes this collection so rich for the classroom, however, is that Leslie knew his audience and included not only the expected battle scenes, but illustrations of everyday life of the combatants so that family members back home would feel a connection to the lives of those serving. In a sense, the American Civil War was the first conflict “observed” by the general public as it happened. The artists who followed the troops became embedded correspondents in the conflict. One artist, James R. O’Neil, is believed to have been the only Civil War correspondent to have been killed in action in the Civil War.

We have arranged the illustrations into seven categories for easy browsing:

Uses in the Classroom

While the Leslie collection includes scenes of all important battles of the Civil War, the additional subjects included by Leslie offer opportunities for studying the larger context of the conflict. The following are just a few of the topics that could be supported by this collection. Please note that each link below leads to just one sample illustration in the collection. Browse or search for additional illustrations related to the topic.

Medical Care. Although the death tolls of Civil War battles were horrific, more died of disease than were killed in action. Explore hospitals, hospital ships, and field hospitals.

Communication and Supply Lines. The maintenance of communication and supply lines was essential for military success. See how signaling, signal stations, distribution of rations, foraging for spoils, meat supply, mobile kitchens, and cooking all played a part in the war effort.

“Contrabands.” Once a state had seceded from the Union, escaped slaves were considered contraband of war and were not returned to their former owners if they could make their way to a Federal camp. Not quite free yet, they received a monthly wage and daily rations for their work and lived in contraband camps near military units.

Entertainment and Sport. Opportunities were sometimes found for activities such as parades and games, or even a Thanksgiving ball. Entertainments were also arranged that included Native Americans and escaped slaves.

Remembering the War. Consider how sites such as Antietam and the graves of the fallen soldiers are preserved.

State History. And, of course, if you are teaching in an area that was involved in the Civil War, it is likely that the Leslie collection will contain images appropriate to your study of state history. The collection includes illustrations from the following states: Alabama, Arkansas, Florida, Georgia, Kentucky, Louisiana, Maryland, Mississippi, Missouri, New York, North Carolina, Pennsylvania, South Carolina, Tennessee, Virginia, and West Virginia.

Each illustration in ClipArt ETC is available in four sizes. Three sizes of GIF images appear on the page. You can download them either by dragging the images from the webpage to a folder or by right-clicking on them and choosing “Save as…” from the pop-up menu. 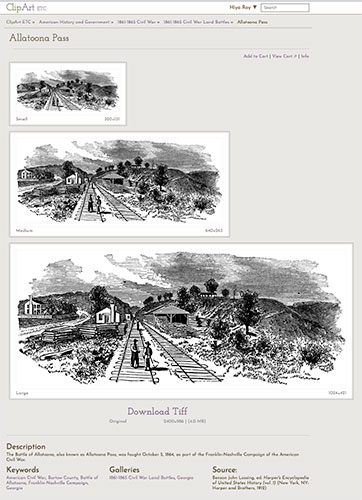 Note that the Leslie engravings are all black and white. If you want to colorize them in a graphics program, you’ll have to first convert them to RGB color. See the Colorizing ClipArt post for tips on colorizing black-and-white illustrations. 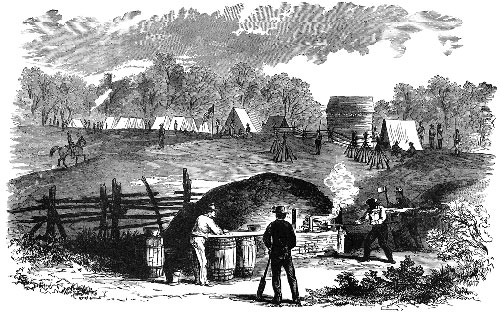 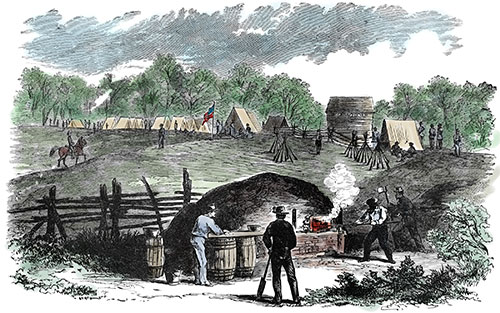 Finally, remember that each image is also available in a super large size. Just click the “Download TIFF” link under the illustration to access the high-resolution version. The large image is great for studying individual details, for creating a type of “Where’s Waldo” activity, or for using in videos. Students can tell a story by panning through one of the large scenes. A small sample using a “Ken Burns effect” is shown below.

See the Civil War gallery of the Maps ETC website for over 100 maps of the War Between the States.