by Christine Harmes | Sep 27, 2020 | Teaching and Learning with Technology, Getting the Most from your TIM Observation Data

As part of the TIM Tools suite, the Technology Integration Matrix Observation Tool, known as the TIM-O, is a framework for guiding the observation and evaluation of a lesson. It can be used for in-person, online, and hybrid lessons. When a lesson observation is completed in the TIM-O, it results in a profile for the lesson in terms of where it can be placed for each of the Characteristics of Meaningful Learning that make up the TIM (Active, Collaborative, Constructive, Authentic, and Goal-Directed). Thus for each lesson observation there is a level (Entry, Adoption, Adaptation, Infusion or Transformation) identified for each characteristic. We recommend that multiple lesson observations be conducted in each learning environment for each teacher. Once a group of teachers has received a set of lesson observations, a report can be generated that summarizes these results and calculates a set of measures that describes patterns and tendencies across the set of lesson observations for the group of teachers. This TIM-O Report and the measures it contains can serve to provide valuable insight for planning and targeting teachers’ technology-related professional development.

Last year we began a series of posts entitled “Getting the Most from your TIM Observation Data.” We wrote this series to assist you in unpacking, understanding, and making the best use of the wealth of data that comes from the TIM-O Report. We started the series with the topic of Extensity, followed by Highest Levels Observed, Flexibility, and Level Prevalence. This month we will complete the series by discussing the remaining measure in the TIM-O report, Characteristic Dominance.

As in the previous posts, we will use the sample teacher dataset of 580 lesson observations from 413 teachers in Anytowne Schools for the time period of 08-06-2018 through 06-01-2019. Our example teachers from this dataset, Mr. Ramirez and Miss Jones, each have three lesson observations. While Characteristic Dominance is calculated and interpreted at the group level, showing how individual observation data work into the overall measure can be helpful.

Characteristic Dominance in the Report Tool

Since this small group of observations was pulled for illustrative purposes from a much larger dataset of 580 observations, let’s look at the bigger picture for making interpretations. The first graphic (below) from the TIM-O Report shows the results for the Dominant Characteristic. Here we see that the Active was the characteristic that was rated the highest in 87% of the lesson observations in this dataset. This tells us that this group of teachers is strongest in delivering lessons that involve the strategies and components of Active learning, and is least likely to benefit from PD in this area. This is followed closely by the Constructive characteristic at 76%. Note that the percentages do not add up to 100 due to the cases of co-dominance. 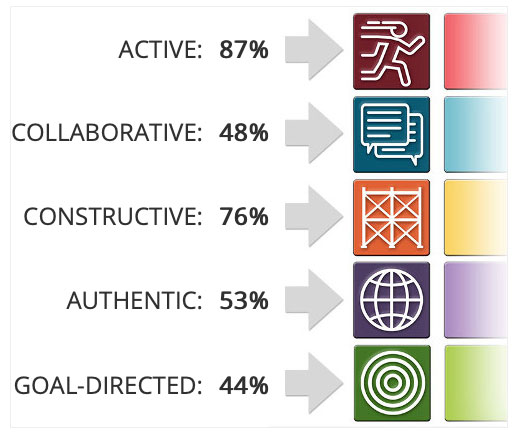 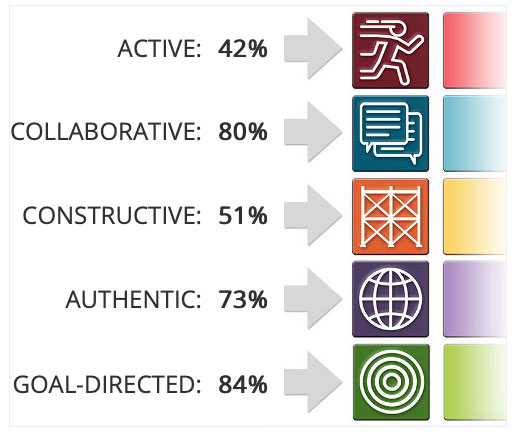 Characteristic Dominance can be viewed across lesson observations for an entire school, or for meaningful groupings such as grade level or subject area. For example, we might look at all lesson observations from middle school science classrooms from the last academic year. If we see that the characteristic that was most often rated the highest was Authentic, this tells us that the middle school science department has Authentic down pretty well. If the Least-Dominant Characteristic across the lesson observations for this group is Collaborative, then we can say that this group of teachers is most likely to benefit most from technology-related professional development that focuses on Collaborative learning strategies. They are least likely to benefit from PD related to Authentic learning. Using the TIM-O Report in this way can help you save teacher time and frustration as well as school or district budgets by better targeting PD.

To wrap up, here is a brief description of the measures found in the TIM-O Report, and that have been described in detail in this series of posts.

As a reminder, an underlying philosophy of the TIM is that teachers should be encouraged to develop the skills to deliver a lesson at every level of the TIM. This allows them to then use the Instructional Planning Model to match the TIM level of the lesson to best meet the needs of the group of students and the curriculum. When interpreting data from any of the TIM Tools, please remember that the quality of the interpretations you make depends on the quality of the plan and data collection you implement. (For a more detailed explanation you can refer to the first post in this series.)

The TIM-O Report gives a comprehensive set of measures that can be calculated for customized groups of teachers and lesson observations. When viewed together, the resulting measures can be used to craft a data-driven plan for teacher technology professional development that makes the best use of teacher time and energy as well as school and district resources.

Christine Harmes is a consultant on research, measurement, and evaluation, and an ICF-certified coach. Her research interests focus on improving teacher use of technology, computer-based testing and usability. At the Florida Center for Instructional Technology at the University of South Florida, Dr. Harmes focuses on research and tool development related to technology integration.